In Defense of Soul Food 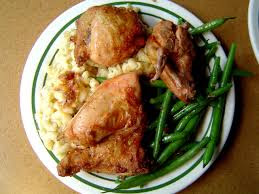 Up until about two months ago, I was a vegetarian for almost four years. My decision to return to a diet including meat was caused my increased boredom with vegetarian food and the inconvenience it was to adhere to such a diet when living with two big meat eaters. I live at home with my two lovely parents and am responsible for much of the cooking, especially in light of my father's recent sickness. My mother is from Harlem and my dad hails from a modest farm in McKinney, Virginia and for them, food's purpose goes beyond providing nutrition. For black people in America soul food is arguably the best preserved of our many traditions. Soul food is the story of black people's resilience against the attempt to erode our ancestral history while lacking adequate access to one of life's basic necessities, food.

Our cuisine has become an integral part of our culture, but it has also led us to become vulnerable to diet-related illnesses like diabetes, high blood pressure and obesity. So despite its deliciousness, soul food is often the subject to criticism regarding its unhealthiness. However, many people incorrectly criticize the nature of soul food and not the true sources of our poor health issues.

Are soul food staples like macaroni and cheese or fried chicken unhealthy? Sure. But is soul food any more unhealthy than French food or Thai food? No, it isn't. In fact, red meat, cheese and corn are the primary ingredients in most cuisines throughout Latin America. But do the French, the Thai, the Bolivians, the Mexicans and the Colombians struggle with health issues to the extent black Americans do? I doubt so.
There are three main problems that lead to poor eating habits. One is the prevalence of preservatives in our food (canned stuff, refined sugar, margerine and not butter, etc). As the Great Depression came to an end, many Americans became fortunate enough to enjoy the convenience of processed goods. However, at the expense of convenience, you lose many nutrients that are found in fresh starches and vegetables while taking in additional sodium. To add to the problem, fresh fruits and vegetables have become a lot more expensive than canned goods, causing families to not opt for the healthier alternative.

Secondly, we must rid ourselves of fast food. It is all nasty and not healthy in the least. You can have smothered turkey wings for dinner alongside mashed potatoes with gravy and string beans cooked in neck bones. But you can't have that for dinner after having Dunkin Donuts for breakfast and Burger King for lunch. If you are going to enjoy high calorie food, you have to do so in moderation. And you might as well waste you calories towards good quality food that will, despite the fat and sugar, give you the substance you need in your diet.

Meat was a commodity that became more accessible as black Americans became better off. My parents both grew up poor and therefore did not have the luxury to eat meat 2 or 3 times a day, every day of the week. This is why I laugh at the prevalence of meat in most soul food eateries. For the sake of historical accuracy and health, more emphasis should be put on southern side dishes. Sure barbecue and fried meat are authentic soul food staples, but they technically more specialties. My father grew up in a small tobacco farm where pork and chicken were not plentiful. He, along with my mother, relied on small pieces of meat that were cooked in the greens, okra, cabbage and string beans. They enjoyed the vegetables alongside black eye peas, butter beans, candied yams, biscuits, potato cakes and grits.  As enjoyable as meat can be, if black people returned to more of a plant based diet, we would cut back on many calories and unnecessary fat.
Basically, everything is okay in moderation- including moderation. We should not dismiss criticisms of our food. Instead we should make the improvements needed for a healthier lifestyle. Soul food is greatly followed for a reason. It is a history of where we come from and how we adapted to life in a new land. The food is interesting, fun and most notably, comforting. So eat and be merry!
Post By Le Chele at 6:00 PM

Got Something to Say?

What Are We Doing?

Escaping of course! This is a place for four young women in their 20s to come together and comment on life's joys and woes, share some laughs, blog about pertinent issues, and hopefully entertain and maybe even share some knowledge with whoever happens to stop by.